An Expensive Race at Sprinker (SCX#4)

Despite not having the mud of yesterday's race, things were going pretty well. 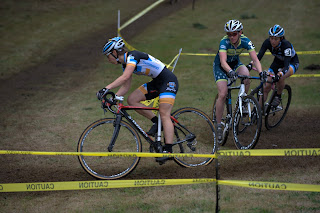 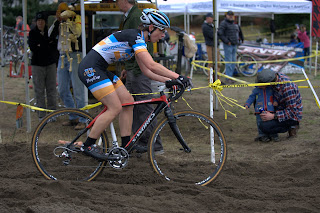 I even quite enjoyed the sandy section. That was until a competitor (I could think of other descriptors right now) decided to re-mount her bike, crashing into me whilst severely miss-judging a pass. My problem might have been in not falling off, because my front wheel took the full force and out ripped 2 spokes.

Carbon tubular wheels just don't respond well to pedal interactions. I think I would have rather had some body damage that would have healed than this that will need to be replaced!

The only lucky break I had was that the pits weren't too far away. A short run and a new bike had me going again. Riding angry helps for a while, but it wasn't enough to catch back up with the main field. I wasn't last though....

Oh Mel, my husband told me about this and I am so so sorry to hear about your wheel. He told me where it happened and I was just shocked that anyone would try to make a pass right there. Such a bummer and such a lame move.