Ok, confession out of the way first. I actually enjoyed this pancake flat, non-muddy, non-technical course in Arlington that hosted the WA State Championships. And no, I'm not saying that because it was designed and built by CycleU-PopCap Team Director Chad Berg (I think I cursed him to his face the week before) but because during a race things change big time.

The speed and chaos of racing makes seemingly innocuous turns much tighter and technical than a pre-ride can reveal. Chicanes breaking up the straight-a-way sections were evil genius - high speed had to be scrubbed quickly for the corner and then immediately you had to be back on the gas to power back up to speed. Rhythm broken, no real rest, and then an anaerobic burst.

Chad did his utmost to make the sandy section as unrideable as possible (with a rototiller at 6am in the morning) but racers just kept on packing it down to make a 6inch solid line through it. However, racers still went down and the trick was avoiding these obstacles without getting into too much trouble in the softer sand.

The morning was frosty and socked in with fog, but by the time we made it up to Arlington the sun had seared a nice little hole around the race course so everything was glowing with vitamin D. After last week's mudfest it was nice to know that clean-up wasn't going to take longer than the race itself.

I had a poor start, but team mate Kristi had a great one and got the hole shot going into the first corner which funneled everyone into a tight twist through some trees. I was sitting 3rd wheel when 2nd place went down in the corner. Argh! I really didn't want to join her down there, so slammed on brakes and narrowly averted plowing through her. I don't know if everyone avoided her behind me, but it did cause considerably chaos and as I emerged from the corner I saw that Kristi had a considerable gap on the rest of us. Hmm, my usual response would be to go harder to catch back up, but why help anyone on my wheel to catch back up? I wasn't going to slack off, but I also didn't need to kill myself trying to catch back on. I smiled as Kristi danced away. 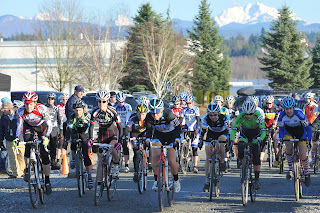 It wasn't long before Kari came around me to go chase Kristi down and I tried to stay on her wheel, but just couldn't match the acceleration in her powerful legs. I did maintain 3rd place though, as no one else could either. Kari eventually made it around Kristi too to take the win, but Kristi (showing some of her old form returning) held on for 2nd and I made it my mission to not allow 4th place gal to catch me. This gal can sprint and there was no way I was going to let her take me at the finish, so half way through the last lap was the time for me to kill myself and get my distance from her. It worked, and I pulled in 3rd for  the States. Good day for the girls! 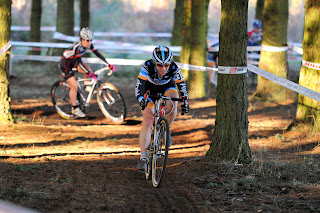 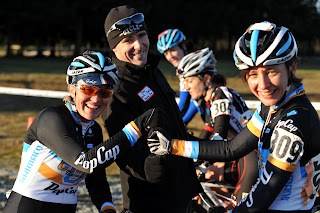 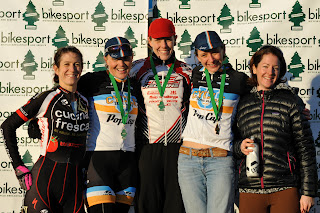 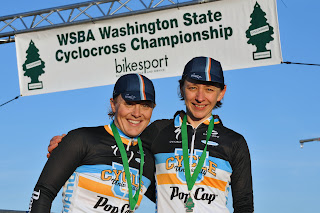 Ok, so maybe the good race had something to do with me enjoying the course too ;-)