The good thing about a 2nd day of racing is you can learn from the first and try to improve. My start position (based on random draw) was even worse than the 1st day - dead last row this time - couldn't do anything about that! My goal was to stay clear of any carnage that might happen and not end up on the ground this time. Success. I stayed on the bike, and although I was still pretty close to the back of the pack it was better than before.

As I was with the pack this time it was frustrating having to slow down going into all the corners as the racers backed up in them. Kind of a new experience for me as I just don't get to race against that many gals locally and I'm usually near the front of the pack. Everyone wants to be ahead of everyone else, so there's a lot more aggression, vying for position than I'm used to too. Sticking with my plan of not ending up on the ground I stayed as calm as I could and patiently waited for things to thin out a bit before starting to make my way up through the pack.


Slowly by surely I did pick my way through the last quarter of the pack. Each racer I passed was a small success and spurred me on to the next. I'd catch glimpses of team mate Kristi ahead of me, and I would have loved to have bridged up to her, but never got close enough to make it worth that extra effort. Racing felt harder this time - likely fatigue from the previous day, but could also have been that the temperatures had dropped to around freezing and along with the wind chill  I was actually fighting to stay warm too. Now that's a new experience for me during a CX race! 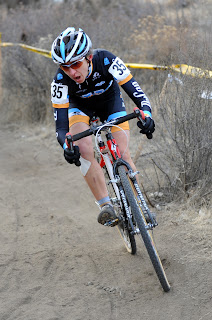 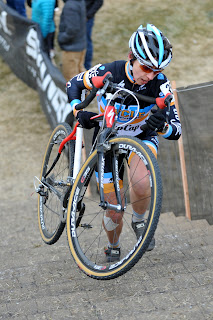 2nd to last lap I made a silly mistake and went down in a tricky loose off-camber section and managed to open up the road rash I had from the crash on day one - ouch! Got back on and didn't lose any places though, just a little ego deflation as it had been a clean race until then. 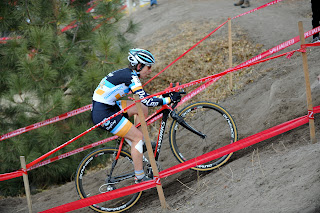 I rolled across the finish line in 25th place - not stellar, better than the previous day! By pure placing, technically my worst weekend of racing CX this season, but I can honestly say I've had a great weekend stepping up to the challenge of racing against the nation's top women. It's only by putting oneself through these challenges that we can learn and improve ourselves. I've learnt a lot this season, but still have a lot more to learn.