2nd day of the weekend was the Rapha-Focus GP. Same venue (Lake Sammamish State Park), same faces, same course, just a little precipitation to spice things up a bit. Alas, not quite enough though. The bone dry course of the day before was really only nicely dampened down. Corners were a little slicker over the roots, but nothing to really get in the way. The sandy section which should have improved with the rain by being more compacted, was in worse shape, probably from the sheer volume of traffic that had been churning it up.

Luck was on my side for this race as I managed to get a 2nd line starting position. I was determined to make the most of it and decided just to go all out and hang on until I got spat off the back of the leading ladies. It was a good plan because my position going into the first few corners meant I didn't run into the same log jams early on. As the leading ladies quickly sped off I was then left to get into my own rhythm and tried to hold my position as long as I could. Worked well for a few laps, but soon 15th slipped to 16th to 17th. I was ok with that, but then fatigue set in and silly mistakes crept in. My 2nd to last lap through the sand pit was the final straw. A huge endo into the crater that had formed at the end of the ramp sent me over the bars and in a tangled mess with my bike. I lost a couple more spots there.

I figured these gals had been behind me so I'd be able to catch back up. No such luck. It took me almost half a lap to figure I'd mashed my shift/brake levers so badly that I couldn't really brake or shift properly. I didn't know whether to be excited or terrified at the prospect of having to pit for my first time ever. Coming around the corner into the pits I gave a wave, to warn Justin (our mechanic) that I was a damsel in distress and coming in. Fresh bike hand-off was a success, although my re-mount wasn't so pretty. I was going again though and on my final lap. Never did catch the gals that had passed me, and ended up staying on my own right up to the finish line for 19th place. Three places up on yesterday.

So what did I learn?

1) A good start can make a huge difference.
2) You have to battle for the entire race. 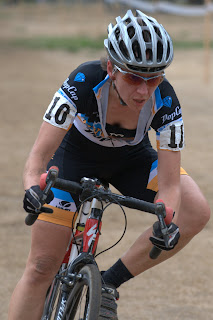 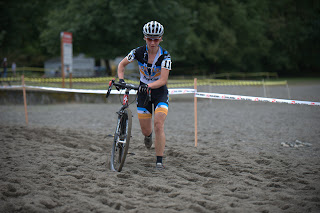 5) You can't practice barriers at speed in your sleep the night before the race. 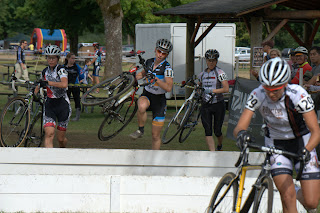 6) Cheering crowds are awesome, but intimidating at the same time (especially when you endo in a sandpit!)