The last stage was a time trial (TT) through the park that we rode through on the 1st day we arrived in Kamloops. Finally something familiar! Unfortunately the published start time of 9:00 was pushed back to 10:00 the evening before the race. Needless to say, we didn't actually get started until 10:40 (ish). The delay, coupled with starting racers from fastest to slowest meant the I was looking at doing my TT in the middle (and hottest) part of the day. Oh well, I guess I was at least somewhat acclimatised to the triple digit temperatures (that's around 40C in new money) by then!

The TT course was a blast as the majority of it was on fast tight swoopy singltrack. A little of it went into some trees, but most of it was through exposed sage brush. The portions of side cut trails with loose edges were not for the faint hearted!

Even with my brains boiling and draining my bladder with about 10Km left to go, I had a great race. I managed to pass around 8 riders in front of me (we set off at 1 minute intervals) and only got passed by 2. The funny thing is that in a TT where you are essentially 'on your own' I actually felt that I had more company than in any of the previous stages of the race! The much shorter course (30Km) and twisting around one small area meant that I could see other racers for the most of the race - quite the motivator.

I have absolutely no idea how I placed in the end as the results weren't posted when I left, but it doesn't really matter. My race ended on a good note - there was good singletrack trail, I raced hard, stayed on trail, didn't get hurt, and finished strong. I am so happy to have finished.

Media coverage of this race has been somewhat lacking. I am sorry there has been so little to follow on the official Intermontane site. The race organisers were so out of their depths putting on this race, I guess posting updates and results were the least of their worries! A couple of places have covered a little bit of the race, but they have been careful not to put too negative a spin on the whole event. Mountain biking and racing in particular, doesn't need bad publicity. Here are a couple if race reports though -

Pedal Mag article on stage 3 and 4 - look closely at the 2nd pic down - I'm at the very back in the tunnel! I think we all only just missed the cameraman as we we racing through a dark tunnel and being blinded as we came out and at the last minute saw the cameraman crouching on the ground in the middle of the road!

My biggest concern throughout this race has been safety. I'm stupid enough to put myself through this kind of event and know the inherent risks of stage racing in the middle of nowhere. I do not think the race organisation had enough experience of putting on a race, let alone a stage race and were completely out of their depths. They were severely understaffed and hadn't taken basic safety precautions. There are always riders that get lost and injured during a race like this, but the shear numbers of lost riders were beyond a joke, and I think it was only a testament to the racers themselves that no one got more seriously lost or hurt. If I hadn't had to finish this race for personal reasons I would probably have quit after day 2 or 3.

I could not have finished this race without the support of Anna. Just knowing someone was waiting for me at the finish line and checking that I got back safely each day was my safety net that allowed me to keep racing. Anna was way way more than that for me though, offering me unrelenting support every single day both physically and mentally. Anna, thank for your courage and humour throughout the week, but most all, thank you for your concern about the color and volume of my pee each day :-) 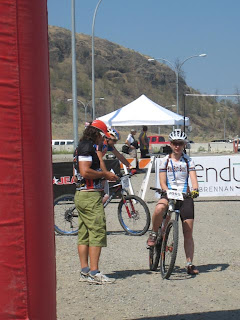 Waiting for my turn to start the TT 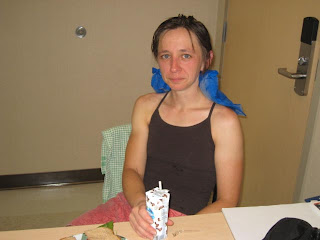 Done! Bring on the chocolate milk!

SO SO pleased its over for you, & that you actually had the satisfaction of finishing & in one piece.
ANNA your a brick --- you can have a medal as well.