It was a taste of things to come when the police escort during the neutral roll-out at the start of the race missed a turn. We did eventually get back on track, but only after some interesting back streets! Route finding during the race was challenging at times too, with assorted colours of flagging tape and marshals not always being where they needed to be. I got lucky and only had to back track a couple of times, others had a half hour 'detour' off course. Maybe the arrows chalked on the ground for the outward route were a little confusing on the return journey as we back tracked down the same road and we were therefore going in the opposite direction of the arrows -duh!


Route finding aside, I've got to say that this was one of the most unpleasant stages of a race I've endured so far. The majority of the day was spent on double track/fire road. Some of the singletrack was pleasant, but the majority was sandy and sketchy. Pretty exposed to the sun all day, it made for brutal conditions in 100F + heat.


I thought I raced pretty well up to about the 75Km mark, where I thought the end should have been. Unfortunately the stage was 5Km longer than it was posted. It took all my physical and mental strength to keep it together until the end. I sucked big time and pretty much collapsed at the end. Anna was there to pick me up though and she got her first taste of real race support - looking after someone who has the the ability to look after themselves. Anna - THANK YOU!
My finish time of 5 hours 36 mins, was a big chunk off the lead gal (Sue Butler) and got me a 9th place out of the solo women, 40th overall. I'm happy just to have finished today.


Over exertion in heat really takes a toll on the body - it took me about an hour and a half to start eating and drinking again after the race. I knew I needed to, Anna was was insistent I did, but my stomach had other plans! I've re-gained control of my stomach now and even managed a bowl of ice cream just now, so things aren't so bad now.


Garmin Stats of the race. 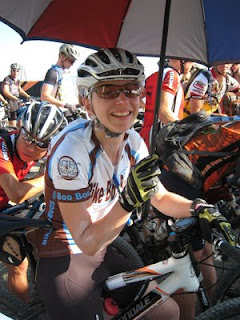 Keeping Shaded on the Start Line 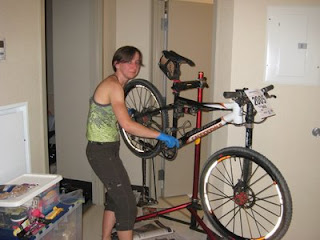 Hope you felt well enough to go to the race meeting tonight and add your voice to the complaints.

With any luck, they'll get enough of a kick in the pants that they realize they have to do a better job of marking the course from now on.

I'm sorry that you're stuck doing your own maintenance for this race - it's the last thing you need after a day in the saddle in that heat. I'd willingly do it if I was there.