Whistler has the best riding

Day seven took racers on a tour of some of the nicest cross country trails in Whistler - Riverside, River Runs Through It, Cut Yer Bars and Lost Lake. I think that for some riders it was a bit of a shock, because the Whistler trails are technical and twisty with rocks and drops. However, for people who enjoy real cross country mountain biking, this is about as good as it gets in a race.

Mel, Christie and Eric raced today. The ten o'clock start was great for Mel who was already up in Whistler, but Eric and Christie had to catch the race bus from Squamish so it was a regular wake-up time for them. Because we are staying in Whistler tonight as well, I was able to concentrate on following the race rather than packing up and moving to the next location. Also, because of the circular nature of the ride and the easy road access, I could drive between locations and surprise the team on the trail. It also meant that I could take some action photos for the first time rather than just start and finish line photos. 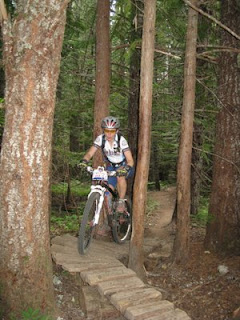 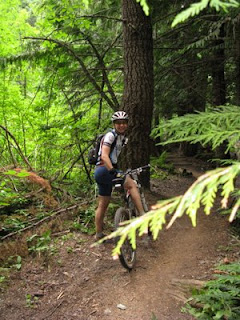 Mel has promised to post something soon summing up her experiences, so I'll leave her to describe the racing.
Posted by Chris at 9:14 PM

Iam bursting with pride, what an achievment. Well done Mel.
only thing is where am I going to get my blog fix from now?
Sheila