After Christie's derailleur issues yesterday, she decided to sit out the day and save herself for the wonderful Whistler trails tomorrow. As a result, only Mel and Eric started this morning.

Food is getting harder to stomach as the days go on. Mel didn't go across for the catered evening meal last night, so I brought some food back. I wasn't sure what she's want to eat so I brought her a lot of everything. Eric said that it would be impossible for anyone to eat that much food. Mel proved him wrong. Mel also skipped the catered breakfast, choosing to have some of her regular cereal instead. Even that didn't go down too well. 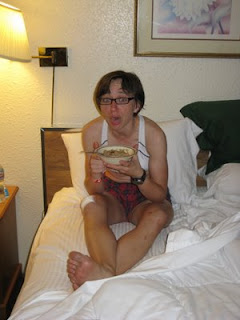 It was only a short ride from the hotel to the start line, but I still didn't make it in time to see them off this morning as I'd only just finished fixing Christie's bike. I had intended to do it the night before, but the bikes were not unloaded from the semi trailers until after we'd left and gone to bed. However, I was there soon after the start and Terry, Christie and I rode up to watch the racers at a couple of points on the trail. Having the start and finish for the day in the same town makes it much easier for the support crew, so I actually got a ride in. After cheering our heroes on at three locations, we headed back to the finish and just snuck in before the reduced Team Bike Boo Boos. Eric dragged Mel around the course today. After rushing to catch the cut-off yesterday, Mel had very little energy left for the long climb up nine mile hill today. In the Test of Metal race, Mel climbs that section in around fifty minutes. Today the same section took her over an hour.

After that climb however there is a fast doubletrack descent followed by "The Plunge" - a short but extremely technical area with steep drops and some wooden bridges. Mel and Eric had no trouble riding through, but plenty of other riders were caught out by it. Many had never ridden anything even remotely like it before. It's definitely a trademark Squamish trail. 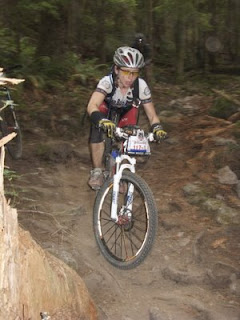 The racers stay in Squamish again tonight, and are bussed up to Whistler for a slightly later 10am start tomorrow morning. We reserved accommodation in Whistler this evening and were here before 5pm. Hopefully we'll get some good sleep tonight so that Mel can be well rested for the final day of fun tomorrow.

There are plenty of new photos on the Bike Boo Boos photo site, so take a look at how the week is progressing.
Posted by Chris at 9:37 PM

Wow! One more day. We hope you have enough left in you to enjoy the trail. You are truly amazing, Mel. Good luck on your final day.

You really are amazing Mel, Mind you with a Mum like me what would you expect --- sure you will make it, GOOD LUCK for the final day.
I have so much admiration for you
THATS MY GIRL ;))