Mel rode with Eric and Christie today, and Terry rode with me. I think that if he ever gives up his racing career, there is hope for him as a soigneur. Last night he took care of all the washing and drying. This morning, our day started with Terry preparing breakfast for the racers while I cleaned up Mel’s bike and changed out the saddle to give her slightly different pressure points so that her saddle sores get no worse.

We gave Eric and Christie a ride to the race venue as they had been staying in the same Motel as us. After dropping them and their race bags at the staging area, Terry and I made sure there were no last minute issues for our competitors before doing the obligatory start line photos.

Then, a quick hop back to the Motel to pack everything up and get on the road. We stopped at the pharmacy to stock up on butt cream (zinc oxide based diaper/nappy rash cream) and were soon heading for the finish area. Terry did show his naivety as an apprentice soigneur at one point by asking whether we’d be stopping at the tourist attractions along the way. I quickly filled him in on the extent of his responsibilities, explaining how personal interests are mere diversions and are not permitted in the rigorous life of the support team member.

We arrived at the finish line just in time to see the lead men roll in after three hours and forty five minutes in the saddle. After we found a spot for the car in the shade and scoped out the shower truck and restrooms for our returning riders, Terry was finally allowed to pursue his own interests. He went for a quick spin to work his leg muscles out while I found some shade to sit in.

From then on it was just a question of waiting until our racers showed up at six hours twenty four minutes. Although we had nearly two and a half hours of down time, we knew that Mel, Eric and Christie could come in at any point so we had to wait around. On other days it would have been possible to leave them to their own devices for a while after they got in, but on this day we had to quickly clean up and then drive to the ferry in order to be in line for the final crossing of the day. 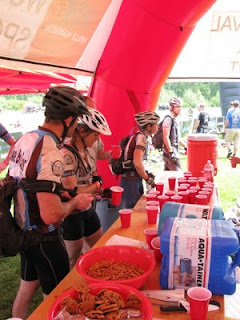 Although we'd been warned that the ferry would be busy, I think we left earlier than necessary as we were the first in line. Ferry terminals aren't known for their shade, so we made do as best we could. 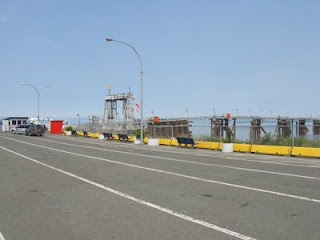 After a one-and-a-half hour crossing, we drove for maybe an hour to get to the second of our two ferries of the evening. This one was a shorter crossing which would probably have been spectacular during daylight, but as it was already 10:30 when we boarded, there really wasn't much to see. We reached our Motel in Earl’s Cove as just gone midnight, and I think I was finally in bed by 1AM. Terry my apprentice was asleep on the second ferry and although he helped drag things up the two flights of stairs to our room, I let him off early and he was already asleep before I finished up.

This ferry rush may seem crazy, but the alternative was to get up at four in the morning and drive Terry and Mel to the start line where they would get on a bus, be driven to the morning ferry, be fed on the ferry, drive to the second ferry, and finally arrive at Earl’s Cove at around 10:30 the next morning. All of that standing around is hard on the legs, and the long sit and wait in cycling clothes is uncomfortable. Instead, Mel got to sleep in until 7:20AM and we still arrived at the ferry terminal before the ferry did.
Posted by Chris at 3:55 PM

Hi Terry T, It was so good to talk to you tonight Hope you enjoy the rest of the race supporting Mel and helping Chris. You have another 40+ years to enjoy all the the things you love to do. You have other rides ahead of you. It must be spectacular scenery. It looks like the back-up team is half the success of the bikers.We are so proud of you. Love, Mom & Dad