Day 5 = Great singletrack for some

I already mentioned derailleur hangers when I talked about Chris Eatough's issues on day one. Carrying a spare one is always a good idea. However, when a manufacturer makes two different hangers which are almost but not quite the same size, and when you trust the shop you buy it from to tell you it's the right one, it's a bit of a surprise when you are out on the trail and your shiny new derailleur hanger doesn't fit on the bike.

This was the situation that Christie found herself in on Day 5. After an hour of trying to make it work, and eventually converting the bike to a singlespeed, Christie decided she wasn't prepared to pedal the remaining distance with a bodged bike. She retired at Aid Station 1, and Eric and Mel rode hard to beat the Aid Station 2 cut-off time of 1pm. They made it with ten minutes to spare, and were rewarded with the smooth, flowing, bermed trails of the Rat Race course.

Christie meanwhile was transported to Aid Station 2 to wait for "extraction". After the Aid 2 cut-off time, riders are either redirected on a faster route to the finish or they are taken off the course in a truck. As Christie's bike was relatively unrideable at this point, she had a ride in the truck.

One reason for the early cut-off was that the finish line had to pack up and move from the Langdale ferry terminal and set up again at Squamish that evening. This included the two semi trailers full of bikes (45' long, two layers of bikes, filled from front to back), the start/finish tent, the medical tents and RV, the bike wash and mechanics, the announcer and timing people, and all the cyclists. Cyclists walked on to the ferry at Langdale and caught a bus from Horseshoe Bay up to Squamish.

Obviously because we had our car there was slightly less stress, except that Eric was out on the trail, Christie was at the finish line, and both of them needed to check in their bikes and get on to the ferry. Luckily, after pushing through Aid Station 2, Mel and Eric enjoyed the singletrack so much that they were done in just over six hours despite the hour of down time on the trail. This meant that they could both shower before we drove for the ferry line and Eric and Christie walked on over to the terminal for the 3:25 sailing.

Langdale to Horseshoe bay is a scenic crossing but we have no photos to show for it because we were all pretty wasted after the day. Terry was with me in the support car, and we actually thought we'd have some time today. We got ten minutes to look at the sea at Roberts' Creek and just sat down with a coffee when Christie texted with her news. 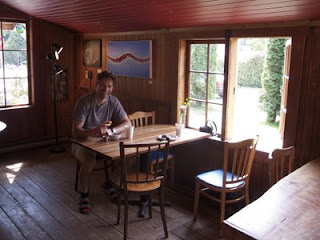 At that time, we imagined that Eric and Mel would have zoomed off towards the finish line, not realizing that they spent an hour trying to do the fix. If Eric and Mel were zooming, we figured that we'd have to zoom too. We both finished our coffee and dashed out to get to Langdale, just to have to hang around for several hours. Terry still hasn't had his tourist attraction time.


In Squamish that evening we found a new derailleur hanger for Christie in Tantalus bike shop. They were just about to close, but took pity on Eric and swapped his wrong hanger for the correct one at no charge. Thanks Tantalus!
Posted by Chris at 9:07 PM

I never thought I'd see Mel pushing a bike, and why is she wearing red shorts?