A warm sunny start at 9 AM can only mean one thing - hot, exposed fire road climbs at noon.

Although they planned a 5 hour race today, Mel and Terry were out for 7 hours 43 minutes. 45 of those were spent waiting for water to be delivered to an aid station that ran out half way through the race. Sensibly, they waited at the aid station for more water to turn up. Others didn't, and I saw the state of them as they crossed the finish line.

Even with that 45 minute wait, Terry was feeling the heat after going off maybe too fast at the beginning. By the end of the day, he was cramping and dehydrated to the point where he had trouble keeping up with Mel. I think it was more of an issue for Terry than for Mel, as at least she was still smiling at the end of the race. 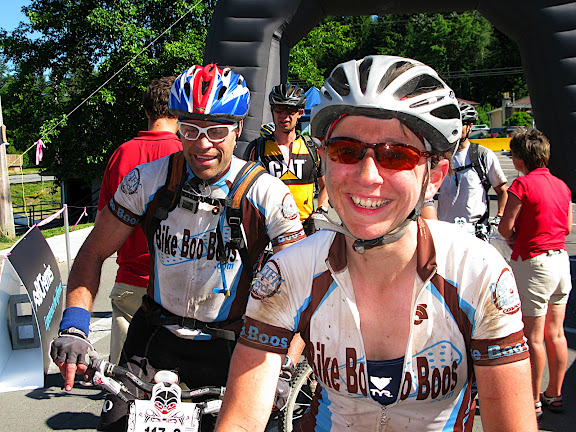 Later on in the afternoon, when we were getting ready to head out for the evening meal, Terry started cramping again really badly. Both my and Mel's reaction was to grab cameras rather than electrolyte tablets for him. If I get a chance to upload the video I will, but until then you'll have to make do with this rather gruesome picture. 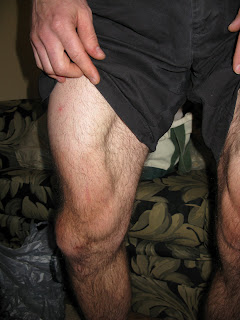 As always, more images at the BikeBooBoos Picasa Web Album.
Posted by Chris at 9:35 PM

Very smart to wait 45 minutes for the water. The rest will make you fresher for today, and the payoff will show as the race goes on. We look forward to your updates, checking the blog every few hours. We hope Terri has a better day today. Good luck to you both...do your best!

Nice quad, yikes that looks painful! Good call waiting for H2O....I am so glad you and Terry are doing this race..it gives me a great excuse to get up and stretch my nose out of the books..I want you to know I really appreciate that LOL What?? It's NOT about ME?? Have a safe ride hope you are done for the day ,Gads it's hot@##$##@