S. Seatac is typically a fast hard course. There's nothing particularly technical to deal with and no major ascents or descents, but you'd be mistaken to think of this as an 'easy' course. The twisty singletrack becomes technical at speed and staying focused is key. Every corner becomes an opportunity to loose time(too much braking), take a visit to the bushes (not enough braking) or gain time (just the right amount of braking). No major descents also means no time for recovery, so power is pretty constant throughout, making it one long hard effort.
The course was drying out nicely throughout the morning of intermittent sunshine. The sport and beginner racers were bedding the trail down well, and the rain over the last few weeks had made for a tacky, not muddy trail. Pretty much perfect race conditions. And then came the afternoon Expert/Pro race! About 1 minute into the race, the skies opened up and we were faced with a rapidly changing course. Any pre-race choices of tires or tire pressures soon went out the window as the course turned into full on peanut butter. We all should have been prepared for this as it's what we've had for the last few months, but I don't think anyone quite wanted to believe it. Visibility was so bad I made the decision to throw my glassed off after the first lap. I could see again, but instantly regretted the decision, as the spray of mud was so bad at times my eyes became filled with goop and I wasn't sure if my contact lenses would revolt and disappear.

I had a good start, leading the women's field for most of the first lap. I was relieved when Kristi came by me to take over the lead because leading was sucky and being able to follow another wheel was actually way easier. This caught Kristi out and soon a bobble put me back in the lead. I had to take what I was given and just went with it, trying to hang with some of the singlespeeders who were catching us up by this point. We were also beginning to pass through some of the expert guys, so passing as fast and smoothly as possible kept things entertaining. Fortunately we have a great bunch of expert guys who most often give you a little room to pass (if you ask nicely). I wasn't too sure what had happened to Kirsti, but assumed she'd be back soon to cause me trouble, so just kept picking off the guys ahead of me to keep my pace as high as possible.

The conditions just got sloppier and sloppier as the rains continued for most of the race. Corners got slicker and I felt my back end slide out several times, but just about managed to keep upright throughout the race. Without another gal directly on my heals I just started thinking about being as smooth as possible so I didn't blow it by wiping out completely or getting a mechanical. There were plenty of shifting and chain suck issues going on as racers stopped to fix things on the side of the course, or completely abandoning the race. I lost my top few gears, but nothing that meant I had to stop - just couldn't go so fast on some of the straight-a-ways. This strategy seemed to work as I completed the 5 (4 mile) laps in one piece and was pleased to finish with a 2 minute margin on the 2nd placed gal. I was super surprised this wasn't Kristi, but a pro who'd come down from Canada. Guess I had the home field advantage on her! Kristi later confessed to not eating enough and bonking in the middle of the race. She's a trooper who doesn't quit though and still managed to pull off 3rd place. I think she'll be prepared with a bigger breakfast next time. 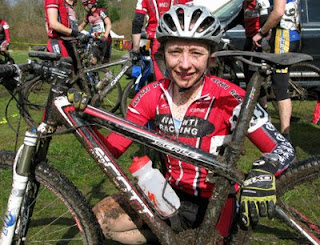 Other great news of the day - Chris came out of retirement and raced singlespeed on his 29er. A solid middle of the pack finish for him, made possible only by my superior bottle hand off - 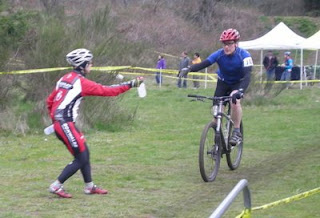 Got it under 20lbs 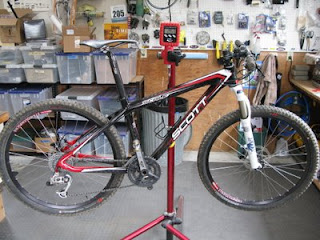