A Little Race with that Lettuce?

Most neighbors lean over the fence and try to irritate you in some way. Not mine. My neighbor (John) leans over the fence and tempts me with something I can't resist. No, I'm not talking about the succulent lettuce (that would be Ellen), but a tantalizing race. The MTS Relay to be more specific. He seems to think that the 'miscellaneous' odd balls that live next door to each other at the end of a dirt road on the outskirts of Duvall can pull off a team relay event - 100 miles in one day - From Hyak in the Cascade mountains, through the Snoqualmie Valley, up the Sammamish River, around Lake Washington, and finally through Seattle to Golden Gardens, next to the Puget Sound.

Stop number 6 for the Indies Series was in the stunning Methow Valley. Conditions couldn't have been more different than last weeks race in Squamish - hot and dry - not a drop of mud to be found. A biker's paradise!

I was not feeling particularly zippy going into this race. Maybe it was not fully recovering from the Test of Metal. Maybe it was the cold that I'd picked up from work that week. Maybe it was missing my greatest supporter (Chris) who'd been away all week. I truly did not want the 5 hour drive across the mountains and if it had not been part of the series I think I would have skipped this one and sat at home and consumed vast quantities of chocolate.

The only good thing I can say about my performance was that it was consistent. Unfortunately, it was consistently crap! My legs didn't want to work from the very beginning to the very end and my 3rd place was really only because I was willing to persevere with the humiliation until the end.
Posted by Mel at 8:19 AM 1 comment:

Moving Pictures!
Now I have recovered a little from my ordeal during ToM, I can begin to laugh at the stupidity of it all. Check out this YouTube video of a section of Crumpit Woods near the end of the race.

Test of Mental (Oops, that should be Metal)

ToM (Test of Metal) seems to have become a yearly pilgrimage for me. For most, it's more of a personal challenge than a race, and I seem to have become fixated on bettering my time each year. The premier Canadian epic race, tests not only a racer's physical endurance during the 67 km and 4000ft of climbing and skills during the technical descending, but also their mental ability to cope with the particular challenges on that specific day. This year it was rain. To be specific, lots of rain. To be more specific, lots of rain that turns the trail into a goopy, sloppy, mudfest, more suitable for the sport of mud wrestling than mountain biking.

We awoke on the Saturday morning to rain and heavy clouds. Even if the rain stopped we knew the trails were going to be a mess. The rain didn't stop. At the start, Robyn and I were not impressed by the prospects of the day's race. 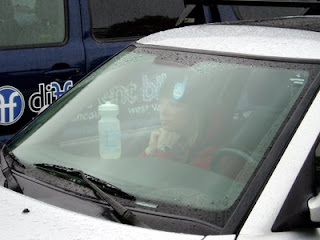 Robyn contemplating not leaving the car 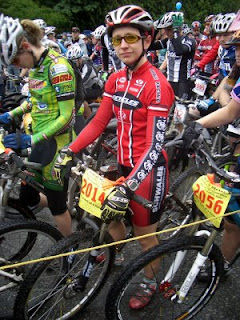 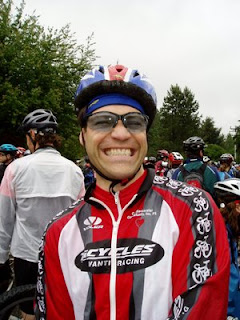 Nothing however could deter Terry
For me, starting with the pros made a huge difference to early placing. I was ahead of the starting chaos of 800 racers all trying to get a good position and didn't get held up by overly enthusiastic races who bonked after the first 20minutes after entering the first singletrack climb. By the end of the first lap into the feed zone I was right on target with my timing. My 1:30 would have me on target for my desired 3:30 finish time. Although I was drenched through and covered in mud, the rain hadn't bothered me too much and Chris was there with an almost perfect bottle hand-off. I was a little confused as to why he was trying to hand me 2 at once though. 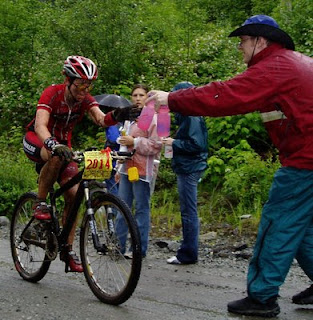 Feed Zone
It's always a thrill going through the feed zone (AKA the power house party). The fire road climb is literally lined with supporters cheering and encouraging and the buzz is almost as good as a Gu for an instant energy burst. The energy boost is short lived though because soon enough you are on your own facing an hours climb on the infamous "Bonk Hill". Usually I take the hill climb as an opportunity to pass others. I should have known something was amiss when this didn't happen. I didn't exactly lose ground on the climb, but I didn't gain any spots either. By the top of the climb I was pretty spent, and during the descent down "Big Ring Rip" I started feeling the effects of the cold on my rain soaked body. By the end of the 20 minute fast descent I couldn't feel my hands and braking was hard. I was beginning to get a bit crampy in my legs and didn't feel particularly co-ordinated. This was not a good way to enter 'The Plunge" - the most technical portion of the race, that can be hard to clean in dry weather. Add in copious quantities of mud and you can have some tricky situations. I wasn't especially pleased with my performance, but at least I stayed on the bike (mostly.) Unlike a lot of other racers who chose to simply dismount and run. I shouted a lot to get them out of my way, but even so, I got held up here trying to pass.


Heading back into the feed zone I was 7 minutes off my target and knew I wasn't capable of making it back up on the next section through Crumpit Woods (AKA Crampit Woods.) I consoled myself with 'every one's going to be pulling worse times' and headed into Crumpit. I was still cold, and beginning to get a headache. I just wanted it to be over. But it just went on and on, seemingly never ending. I just wanted it to be over. Nothing left inside me, I added another 11 minutes to my time deficit and to rub salt into the wound got passed by another gal that I just couldn't stick with. If I'd had anything left I would have allowed her to lead into the finish and take her close to the line. Not even close!


I finished up in 3:48 - 18 mins off the time I wanted, and 9 minutes back on last year's time. I was covered in thick mud, had a raging headache and wandered around in a thick haze waiting for Chris to arrive to be able to change out of my wet clothes. The only consolation was that I did finish and it was good enough to get me an 8th place - right around mid pack. Not bad, but not good either.


The next day I felt like I'd been rolled down the mountain rather than I had ridden down. Pretty much everything hurt. I hadn't enjoyed the race and didn't feel pleased with my performance. So what am I going to do about it? Yep, you guessed it, go through it all again next year, in my sick quest to beat my personal best once again.

How can you pass up the opportunity to race a race that ends in a beer garden? Maybe when the race starts at noon and the temperatures are heading towards triple digits, and you really don't need a beer to give you that 'light headed' sensation. Leavenworth, our very own little Bavarian town in the heart of the Cascade Mountains, is home of this tempting combination of sports - racing and beer drinking. I was vaguely disappointed that no one was wearing Lederhosen for the race.

Somewhere on one of the three 1800ft, 4 mile climbs I do believe I heard a strange sound, no, it was not far off yodeling, it was the sound of boiling brains (mine to be more specific) - well maybe not quite boiling, but at least a little light poaching. Or was it beer being poured in the beer garden? No, that wasn't going to start until later.... Wait, maybe I'd been out so long it had already started. No, better to believe that my brain was poaching itself. Thank God it wasn't yodeling.

For every climb there was a rather fast descent - smooth, bermy, with a few water ditches to avoid launching over. I felt cheated - a nearly 40 minute climb for a 12 minute descent?! What a waste of altitude. I was OK with that though because every time I reached the bottom I would pass Chris with his life saving bottle of water that I soaked my head and back with each time. It was bliss. At least until about half way up the next climb, by which time the water had evaporated. A couple of stream crossing tickled your feet with cool comfort each descent, but were actually evil traps, tempting you to stop and lie down in the cool flowing water. No, must not stop, beer garden at end..... 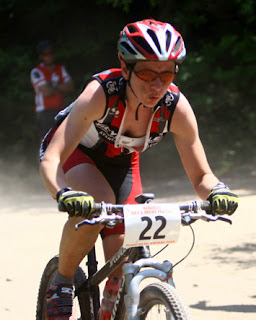 I lost my lead near the end of the first climb - Kristi kicked it up a notch and I just couldn't stay with her. My heart rate, already in the 190 BPMs just didn't have anywhere else to go. I also hoped that Kristi was making a mistake and would blow up later. She never did, I lost 4 minutes to her. She obviously needed a beer more than I did! 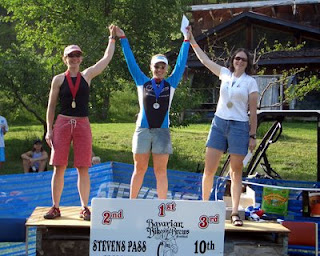