It's never a good sign when they put 'mudder' in the name of a race. The recent dry weather however made this a misnomer, as the trails were dry to the point of being dusty. The few sprinkles of rain we had before and during the race only made the course better, tacking it down nicely, so the sandy sections weren't quite so sketchy.

With only a few hundred feet from the start before getting into singletrack, a fast start was pretty essential. I got the hole shot I was looking for, but the rest of the pack was not quite so fortunate. A crash in the back took a few gals down and then a tangle up at the front led to 2 of my strongest competitors going down. They fell pretty hard but both managed to get back up. Only one continued on though as the other (my team mate Nic) couldn't put any weight on her wrist. She did the right thing to quit then and there, as later X-rays revealed what she suspected - a fractured ulna. This sucks because 6 weeks in a cast is no fun for anyone, and in the middle of race season a complete waste of all the hard effort put into training. Plus we only have a few good riding months in the year, and she'll be out for some of the best :( 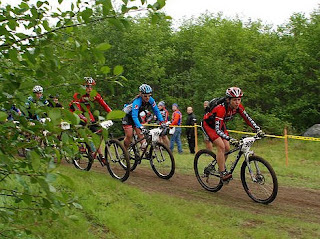 Because of the gap I managed to get off the start, I raced alone for the entire race. I had to be extra careful to stay focused as I knew that Kristi would use all her strength and determination to catch back up with me. I used the men in front of me as rabbits to catch and imagined my competition breathing down my neck. The twisty course with short ups and downs was challenging at times, but I kept it clean, and I got some good flow going. 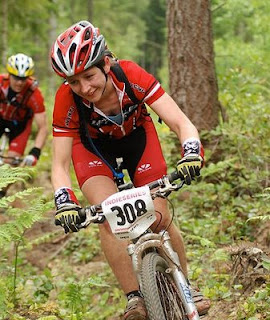 I think I'm smiling in this picture - it's near the end and I know I can't be caught. I'm about to relish my first win as a pro racer.
Posted by Mel at 6:31 AM

We didn't realise that this was your first pro race. No wonder you look so happy in that great photo.

Great start to your pro career.