What would Sea Otter be without a good downpour? The skies opened on Saturday and many drowned rats (including myself) fled the venue seeking higher ground. I wasn't racing so wasn't concerned, and enjoyed putting my feet up back at the hotel. Others weren't so fortunate, either getting completely drenched before or during their race or having their race canceled. Porta-potties were lying at precarious angles waiting to discharge their contents on unsuspecting passer-bys. Water flowed through the venue as the clay soil just couldn't keep up.

My race was the next day, so I secretly prayed for the rain to keep up all night, knowing this could be my advantage over the fair weather racers. Unfortunately the rain moved on almost as quickly as it came in and by Saturday afternoon things were beginning to dry out again. By the next morning (race day) blue skies greeted us and the course was in perfect shape as the rain had packed down many of the loose, sandy portions making it easier to get traction in the corners and ascents. Advantage wiped out, I decide just to enjoy the course as a complete contrast to last year's.

The Cross Country (XC) race started on the Laguna Seca Race Track - smooth, fast pavement that led into a double track gravel climb. Plenty of time to jockey for position before hitting the singletrack, so my aim was not to take poll shot, but to sit in the pack and draft for as long as possible before hitting the dirt climb. Mission accomplished I headed into the singletrack with about 5-7 gals in front of me. This was fine until we caught up with the juniors who had been sent off before us, as passing them on the singletrack climb was a little tricky. Only got caught in a couple of sections as gals bobbled in front of me necessitating a dismount and run. But soon it opened out and slower gals eventually dropped back.

A shorter race than last year (only one lap of the 18 mile course) I was annoyed because I've improved my endurance over last year and couldn't rely on gals fading on the 2nd lap. I had to keep as high a pace as possible from the beginning. Having a number of gals around me at the same pace helped because I was constantly being challenged and I could see gals in front of me that I knew I had to catch. Some were better climbers, some better descenders, but mostly we stayed within sight of each other. Apart from the lead gal who just kept inching away from the rest of the pack - as long as she didn't have a mechanical or crash she would take the win for sure.

Placing got a little confusing as we worked our way through the juniors and the singlespeed machines, so I couldn't actually tell who was my immediate competition easily. I treated all women as competition, but did work with one singlespeed gal as the wind was particularly energy zapping on the final climb out to the finish. She would pull me up the climbs and I would pull her along the flats. Nice strategy as it got me closer to one of my competitors. I was climbing slightly better than her, but decided not to pull past her right then. I did something I rarely get a chance to do, and that is play tactics. I just waited, and sat on her wheel through the final singletrack that led back onto the race track to the finish. When we hit the pavement she did her best to get me to off her wheel by zig zagging across the track. I stayed with my plan, knowing she was using all her energy cutting through the head wind on the track. Just as soon as I saw the finish line I sprinted as hard as I could, leaving her standing. It was so sweet, I almost want to do a road race again!

It took a while for the results to be published, but my efforts got me a 4th place podium finish. Considering the age range was 19-39 I was pretty darn happy with my result, knowing that the top 3 were all way younger than me. 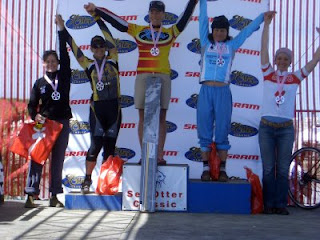 The enjoyment that you gained from this race shines through from your comments. Bet you'd have done even better if it had been a two-lapper.
Even so, gaining 4th position when the age range is so wide is no mean achievement.
Congratulations; you've earned a bit of a rest. Why not take a holiday?!
Phil