I'm beginning to wonder if I shouldn't re-name this blog 'Confessions of a Rain Diva'. Headed down to Portland last Sunday afternoon to meet Sue for our big 3 week racing/training adventure. The basic plan was to drive to Arizona for the NOVA National NMBS Race being held the following weekend, race, drive to LA for some sunny training time and then on up to Monterey in California for the Sea Otter Classic Race. What's a couple of thousand miles on the clock if you can go ride in the sunshine?


I left Washington as the sun started to get going (the first time I had seen the sun for a long time!) by the time I reached Portland the rain had started again. I did my best to out run it, but a nice officer stopped me on the freeway and reminded me what the speed limit was so I had to behave the rest of the way. Sue didn't beleive it had any chance of being rainy in California, but she hadn't bargained on my powers and yes, a rain cloud followed us down to San Jose (our first overnight stop) where they had had pretty much non-stop sun. We wanted to get a quick spin on the trails before our long drive down to Arizona the next day, and we were thankfull of a break in the rain that morning. However, we hadn't bargained on the trails being so wet that they were closed - duh! We did find plenty of mud to cake our pristinely clean bikes in though and fascinated ourselves by watching the clay build up on our tires and then fly off in random big chunks. Every now and then we would come to a big halt as the build up on our tires becames so big it got jammed between the fork and the wheel. This wasn't going to plan......


The drive through California and onto Arizona was uneventful, boring, and yes, you guessed it, followed by rain clouds. We arrived at Paul's house in Fountain Hills (just outside of Scottsdale) late that night and were happy that the 20+ hour drive to get to our destination was finally over. We slept well. Paul is a 'snow bird', living in Arizona during the winter and Portland during the summer - catching the best of the weather in both places. He'll likely head back up to Portland in May before it gets too hot in Arizona.

Paul's cache of bikes in his garage made Sue and I feel quite at home. In his mid 60's he's still out most days either on the road or the trails. The next morning he showed us a trail to get to the race course - a rock strewn fun twisty trail that made me wish I'd brought the Epic full suspension bike rather than my hard tail. We learnt not to go near the sharp pointy objects lining the trail (they call them Cacti) and to avoid the small green balls that had fallen from said cacti, that were in fact land mines waiting to blow up your tires. 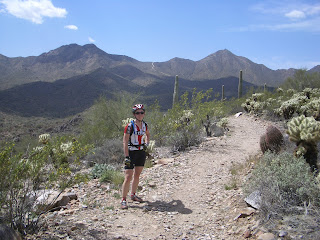 The terrain is very different here! Wait, there's something missing - where's the mud and rain? This can't be right. Have I finally gone far enough South to be safe from the rain?

We got to pre-ride the XC course a couple of times, and it's way more fun than I was anticipating. Some smooth rollers, some short drops into bowls, some rocks and lots of twists and turns. Nothing majorly technical, but enough to keep you on your toes. No major climbs or descents. I'm looking forward to it.


Ended up being out for 5 hours (a little longer than anticipated) and I was a little beaten up on my hard tail by the end of the day, but had a nice bid grin on my face to go to bed and sleept well for the next day of pre-riding the Time Trial course.
Posted by Mel at 9:55 AM