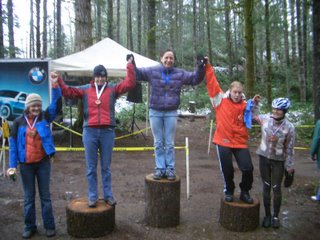 I specifically avoided the 'cross season this winter because I was fed up with racing in the cold and wet. So what happens in the first MTB race of the season? Yes, cold and wet.


The race is early in the season, but in previous years it's been anything from vague drizzle to full-on sunshine. This year, it looked to be more of the same on the weather forecast but when we got close to the course, we noticed a distinct sprinkling of snow on the ground. At the start/finish area there was about 4" of snow, mixed in equal parts with the rain now falling and the churned up mud. Temperatures hovered at just below freezing.


We got there early as we wanted to watch the beginners go off - Paul, a friend and long-time riding buddy was due to enter his first ever race, and having watched him suffer over the years, we wouldn't have missed it for the world. Because of the conditions, they delayed the start for an hour so a whole bunch of beginner riders got to sit around getting colder and colder. Of course, Paul's team brought a honkin' great RV with them, so they weren't affected by the weather at all. It made our little canopy tent look a bit flimsy.


The beginners went off without too much fanfare - I think it was just too cold for people to be enthusiastic. It was immediately obvious that the conditions would be unpleasant as the field raced away through hub-deep puddles. The Tahuya course is one big loop, so we didn't see the riders until they crossed the finish line (one lap only for beginners) - and Paul came across in second place for his category! He was numb from the cold and had only one warning - stay high on the bermed corners, or else you'll sink.


Now it was the experts' turn. I raced Open category (cash prizes!), and three other Ti Cycles women were on the start line with me. The beginners had one lap; we had three! After grabbing pole position of the line, I decided to take a different route than everyone else (no pre-ride, it was just too cold) and had to re-join the field in fourth or fifth place. This didn't prove too much of a problem as most of the group had real problems getting traction on the climbs, whereas for whatever reason (full suspension? tire choice?) I could stay on my bike. By the end of the first lap, I had a minute's lead, and this was enough over subsequent laps to win the Open category. Unfortunately, some of the other women had mechanical issues or just plain cold issues, but Jitke took 5th in Open, and Michelle took 4th in Expert for Ti Cycles. Not a bad showing for the first race of the season.
Posted by Chris at 8:41 PM